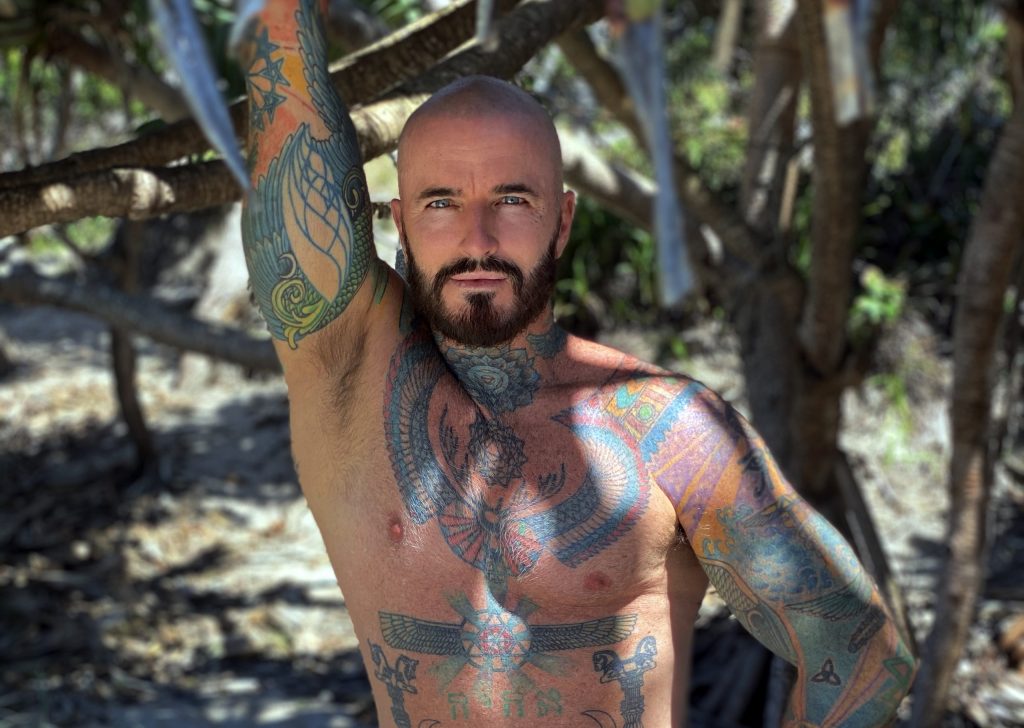 A journey of becoming

I’ve been thinking a lot lately about how men (and all people gender specific or not) can benefit from a regular physical practice and how I came to be where I am.

In a society that bombards us with the perfect social media image and the perfect life plastered over our televisions, it’s not all sunshine and roses. There are people that are not coping, that don’t live up to the image thrown at us every time we open our phones, computers or turn on that TV.  I’ve seen people fall apart and crumble under the pressure they put on themselves to be something. Heartbreaking. Maybe we can’t fit in with a world that promotes a certain standard of beauty or idealised living anymore. Maybe it’s time to change.

I can only speak for myself in what I see around me and express from my point of view. I’ve had students that have been so far in the depths of depression that they have taken their own lives. Men that feel like they don’t match up to the bravado and macho stereotype. But that’s another story.

So, how can we support each other and listen, then what action can we provide to help? I am still figuring it out, and perhaps there are no answers, but help is there somewhere if you hunt for it.

I don’t profess to know the answers, but I know I am much more than a “Yoga Teacher” and possibly my journey can inspire and awaken a passion in someone that they didn’t know was there. 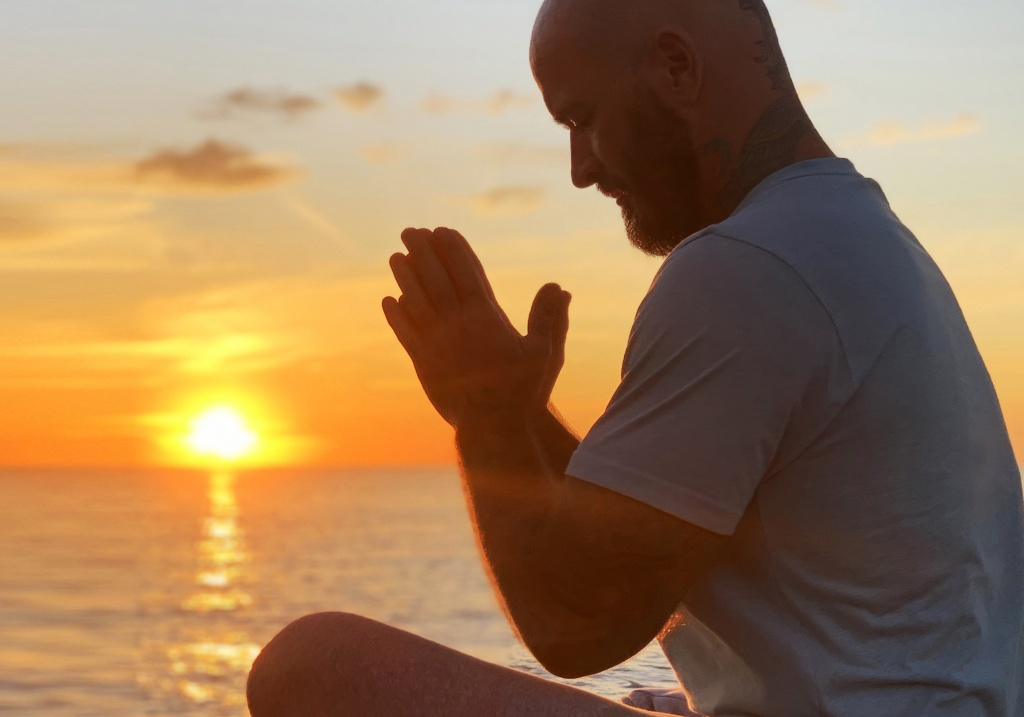 So, how the f@%k did I become a yoga teacher?

Yoga really found me and I now realise that I am continually finding myself within the practice. I remember being at high school and a friend of mine mentioned that they had heard of “Sun Salutations” as a way of becoming more flexible. I wasn’t particularly super flexible but had done gymnastics and martial arts as a youngster. For some reason I had the goal of standing and putting my hands flat on the floor with my legs straight. In yoga they call it “Uttanasana” which means ‘intense stretch’, which it is. So, that was the catalyst for me to get moving and motivated to lengthen my hamstrings.

As a 17 year old from the western suburbs of Sydney, there was nothing spiritual about it even though mysticism was apparent within me from an early age. I just had no idea what yoga was and I also had no idea that it would end up being a major part of my life for so many years, and a career that has since taken me over the world. 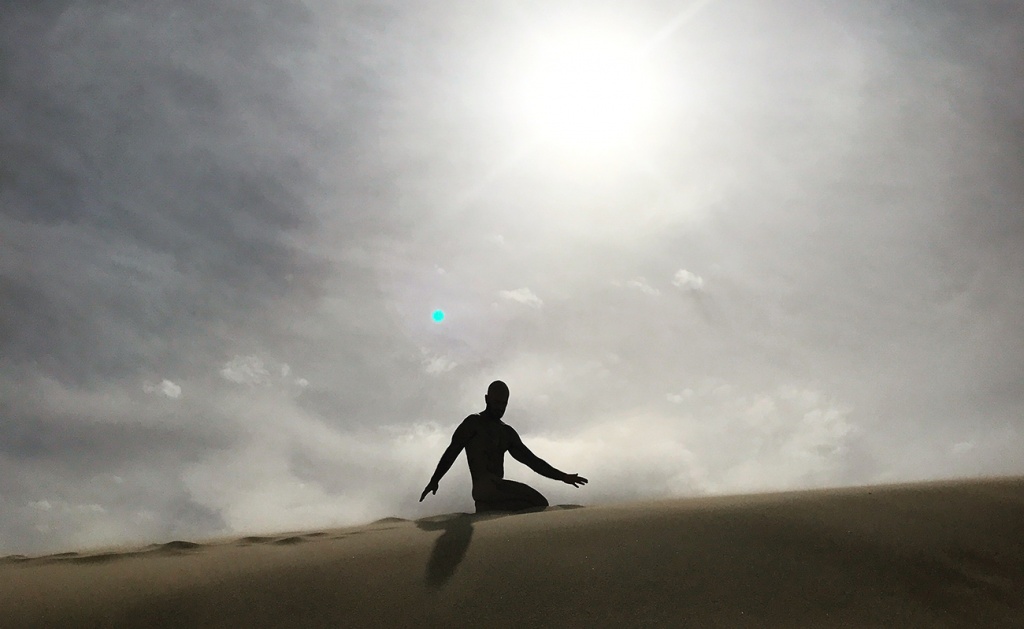 After the flip of a coin (literally) at 21 I decided to pack my bags, leave Sydney behind and get on a train to Byron Bay (back when you could get trains there). I didn’t know anyone, anything, where I would stay or for how long and that it would change my life completely. I ended up camping in the bush for a while at the back of a tea tree lake, removing myself from the failed relationships, the lack of family connection, the heartbreaks, the pressure of not having money or direction, the whole lot of it. I shed my past, I hitch hiked around bare foot and remembered to hunt beauty. I spent a lot of my time on the beach, alone in nature and hung out with witches as often as I could. (Loads of fun). As someone that had dived into Tarot and mysticism at 11 years old, I ended up reading tarot cards on the street via donation just to be able to eat and trained in the deeper art of Tarot and physicality with my dear friend Ly de Angeles.

I was performing weird performance art shows at the local tropical fruits parties and doing yoga with a great teacher named “Cat” at the then spit and sawdust local gym. She introduced me to some of the deeper layers of yoga and it was then that I heard about the Chandra Namaskar or “Moon Salutations”.

Wait… what, there were salutations to the moon as well?! My mind was blown. I hitched a ride to Sydney barefoot and read some Tarot cards at the local cafe and made some spare cash doing some shows for fun. 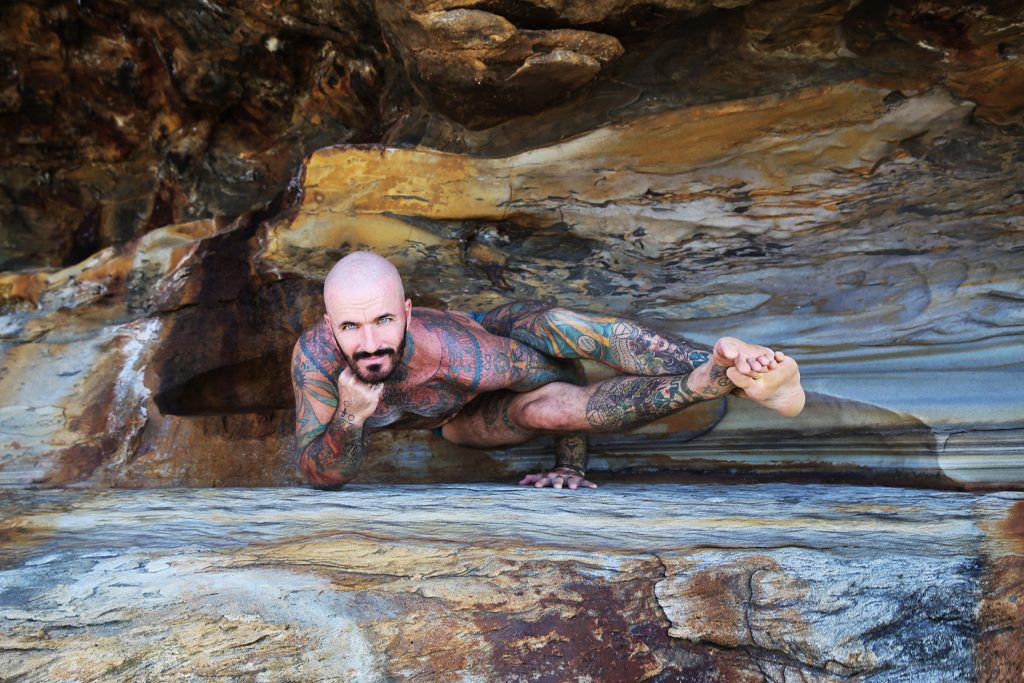 Anyway, to cut a long story short, I became an aerial acrobat, performing and teaching all over the world as my career.  I was (and still am) getting people to move, breath and work their body with stretching. Back then I incorporate yoga positions in my warmups before climbing in the air. Discipline was part of the routine and extremely important when you are hanging 10 meters upside down often without a crash mat. That kind of focus and discipline ultimately saved my life. As someone with an addictive personality it kept me relatively clear on the path of health and physical fitness.

When I was living and working in England (which I did for 10 years), I ended up moving to Birmingham where I really didn’t know many people, so the local hot yoga studio became my home of sorts. I was there daily.  I eventually connected to community and made solid friendships with people that I resonated with. I think that’s important, finding connection with people that “speak your own language” and I don’t mean English. My focus and discipline deepened and I eventually  discovered that for me, meditation and yoga were the same thing.

The layers were deepening, I was diving in. Scary stuff for someone that already thinks way too much.

I took off to India to do my first teacher training with a teacher named Bharrath Shetty who was a dedicated student of the late and great Iyengar for many years. It was with him that I learned detailed alignment and while in India, the way of life that is yoga. Ahhh India, intense in its beauty and spirituality and all the other things that are a sensory onslaught to someone that is way too sensitive like me. I was changed, my eyes were opened again and I appreciated my life in ways I had never before. I went back a year later to complete my advanced training, soak myself again in India and learn more techniques with the breath and cleansing the body, along with turning my body into a human pretzel. (Fun for someone like me that was used to hanging from the ceiling and doing crazy tricks for a living!) 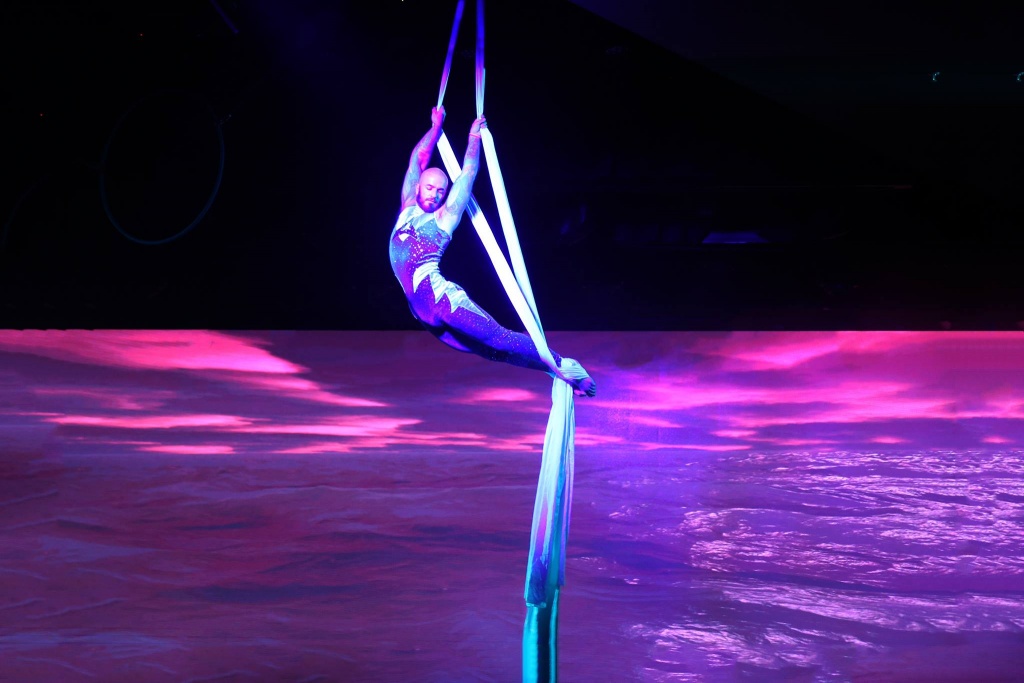 Since then, I have practiced and studied various movement styles over almost 30 years on my journey into movement with many amazing teachers. Maty Ezraty and Shiva Rea have been a big inspiration along with my students, a constant source of inspiration. If not for them I wouldn’t be teaching.

My understanding of yoga and movement is constantly changing as I change. Evolution is the natural order or life. I have now completed over 1,500 hours of accredited training, countless hours of workshops, masterclasses and teaching. I still don’t know if I am yogi ( or ever will be), I’m just me. I’m not one for boxes, so defining myself into one category or label is not appealing. I don’t know if anyone really knows what yoga is, I’m sure people will tell you they do, but for a subjective art form it’s hard to describe into words. Again, there are so many possibilities and opinions. Personally, for me it is ever changing and evolving. What I thought yoga was 30 years ago or even 30 days ago, is not what I believe it to be now. It changes as I change. I am still on my journey of becoming.

Yoga has helped me listen, to others, to myself and what I need. Yoga helps me breathe, find space in an often cluttered mind and remember that I can and that I am here. It also helped me reach that goal of putting my hands flat on the floor, and so much more. 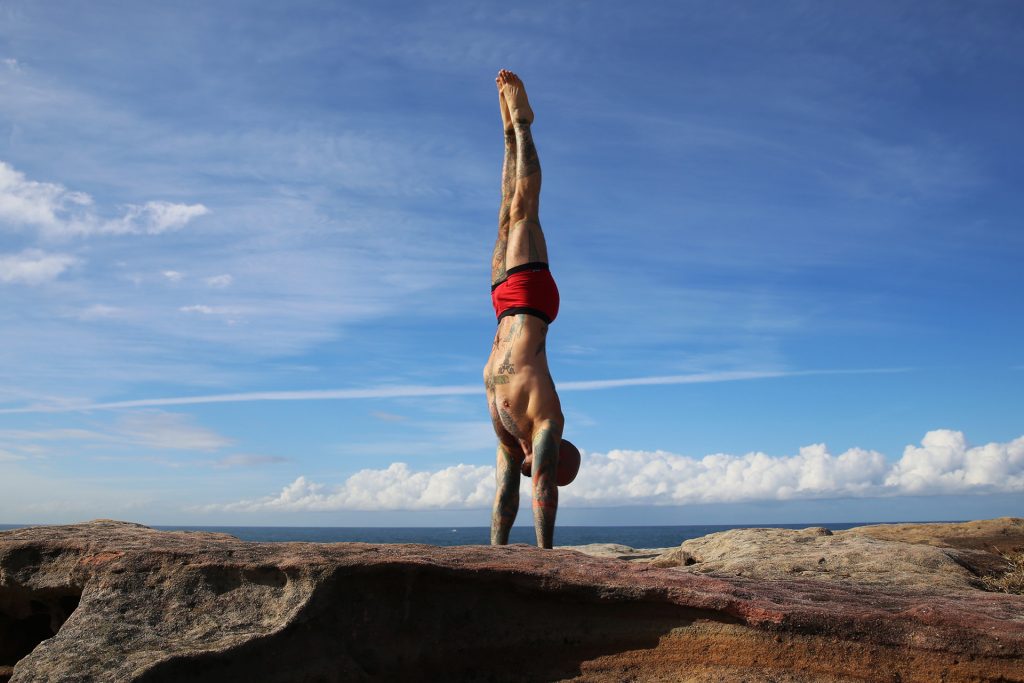 Yoga reminds me that I am perfect the way that I am in all my imperfections. It helps me breathe, find space and really ground into my body, because it’s easy for my head to go up in the clouds. I’ve suffered from spouts of anxiety, depression, addictions, lack of self-worth, self-esteem, impatience, laziness… you name it and  I’ve probably been through it, like most other people.

Yoga has taught me that all things change and to embrace change. Every moment is never the same as any other.

Yoga has shown me that we can inspire each other, to care about our body, to remember the best version of ourselves in that ever changing moment. It has shown me to really see people and to see myself. I don’t know how my life would be without yoga in it. It’s kept me healthy, strong and flexible like my aerial acrobatic work has. The creativity and community yoga has brought into my life is a blessing I am thankful for every day. The teachers that have inspired and come before me I honour, and the teachers that come after me, I aspire to inspire.

To know that I have possibly changed someone’s life for the better, even for a moment, just by being me and sharing my passion for movement is my greatest joy.

A plague of proportions